The #1 Weight Calculator for Puppy Parents

If this little dog has already stolen your heart, you’ve probably ended up here to do some research before bringing your new family member home. In this Dachshund size guide, you will learn all about the size and growth patterns of Dachshunds. We’ve also created an interactive Dachshund size chart and puppy growth calculator, which helps predict your puppy’s full-grown size!

Our handy interactive puppy growth chart and calculator takes all the hard work out of predicting your puppy’s potential adult size. This helps you to know exactly what you are in for.

Hot Dog, Sausage Dog, or Wiener Dog. Dachshund sure has many funny names and none of them comes as a surprise. Dachshunds have made themselves a name thanks to their distinctively long bodies compared to their small size.

As if the cute looks aren’t enough, Dachshund is well-known for a playful personality and loving nature. They make great companions to singles and families. They enjoy spending time with their humans and just as much with children. And with that brave, courageous attitude, your Dachshund pup will gladly take on the world with you.

Although Dachshunds, and all dogs for that matter, go through very similar growth phases, it isn’t the exact same journey for everyone. Firstly, smaller dogs reach their full size a lot sooner than large or giant breed dogs. Secondly, all dogs are unique and experience their growth in a slightly different manner.

On the other hand, we can do some guesswork on how big do Dachshunds get. Most notably, if you’re adopting your Dachshund puppy from a breeder, you can already get a better picture by looking at the parent pups. Genetics play a huge role in predicting a Dachshunds full-grown size.

Of course, not all puppies in the same litter are exactly the same size, but this will give you a rough idea as to what to expect. Additionally, your Dachshund puppy’s growth rate and size is also affected by their diet, nutrition, and how much they exercise.

It’s important we highlight that all puppies should be fed specially designed puppy food to support their growth and development! You can learn more about the topic from this article.

As Dachshunds are prone to obesity, make sure your pup gets the right amount of high quality food to avoid any decline in life quality and life expectancy!

Are There Different Sizes Of Dachshund?

*A dog’s height is measured at the highest part of their shoulder blades, also known as withers.

But what about Dachshunds who weigh between 12 to 15 pounds? These little guys are referred to as Tweenie Dachshunds. Although they exist, they do not have an official classification by the AKC.

Additionally, you might’ve heard about the Teacup Dachshund size a.k.a the Rabbit Dachshund. Although the toy breeds weigh less than 8 pounds, and the AKC has stated that the Miniature Dachshund size is 11 pounds or less, please be aware of breeders who produce unhealthy puppies using unethical methods. For instance, breeding runt puppies to achieve a certain aesthetic.

Here’s a useful article we wrote on how to choose a responsible breeder.

Moreover, male Dachshunds can sometimes be slightly larger than females. However, the difference is just a few inches and a few pounds. The average Dachshund size is pretty much the same for both males and females.

With slight variation, both Miniature and Standard Dachshunds experience the most rapid growth rates until the age of 6 months. After that, their growth will slow down significantly, and plateau by the time they turn 12 months old.

Additionally, this is why it’s particularly important that your Dachshund puppy gets the correct nourishment he needs to grow that adorable little body into a healthy adult one. Check out these guides on best dog food for puppies here.

Let’s have a look at the Standard Dachshund size chart by age:

If you’ve adopted this cute little pup to your family, try our interactive Standard Dachshund size chart and growth calculator to predict their adult weight!

You can calculate their potential adult weight at 23 weeks by taking what they weigh at that age and multiplying it by two.

A different formula you could use is:

So, for example, if your 12-week old pup weighs 18 pounds. You simply divide the current weight by their age in weeks and multiply the result with 52:

78 pounds would be the expected weight of your adult-sized Dachshund.

Is A Dachshund A Small Or Medium Dog?

What Is The Average Size Of A Miniature Dachshund?

How Big Is A Standard Dachshund?

Standard Dachshunds usually weigh anywhere between 16 to 32 pounds, and stand at around 8 to 9 inches tall at the shoulder. There’s also the Tweenie Dachshund, which falls right between the Miniature and Standard Dachshund full-grown sizes, weighing around 12 to 15 pounds.

In conclusion, there is a variety of reasons to think about before adopting either a Miniature or Standard Dachshund. We hope we managed to answer all of your questions about the size and growth patterns of both of these pups, and hopefully you learned something new from this article! 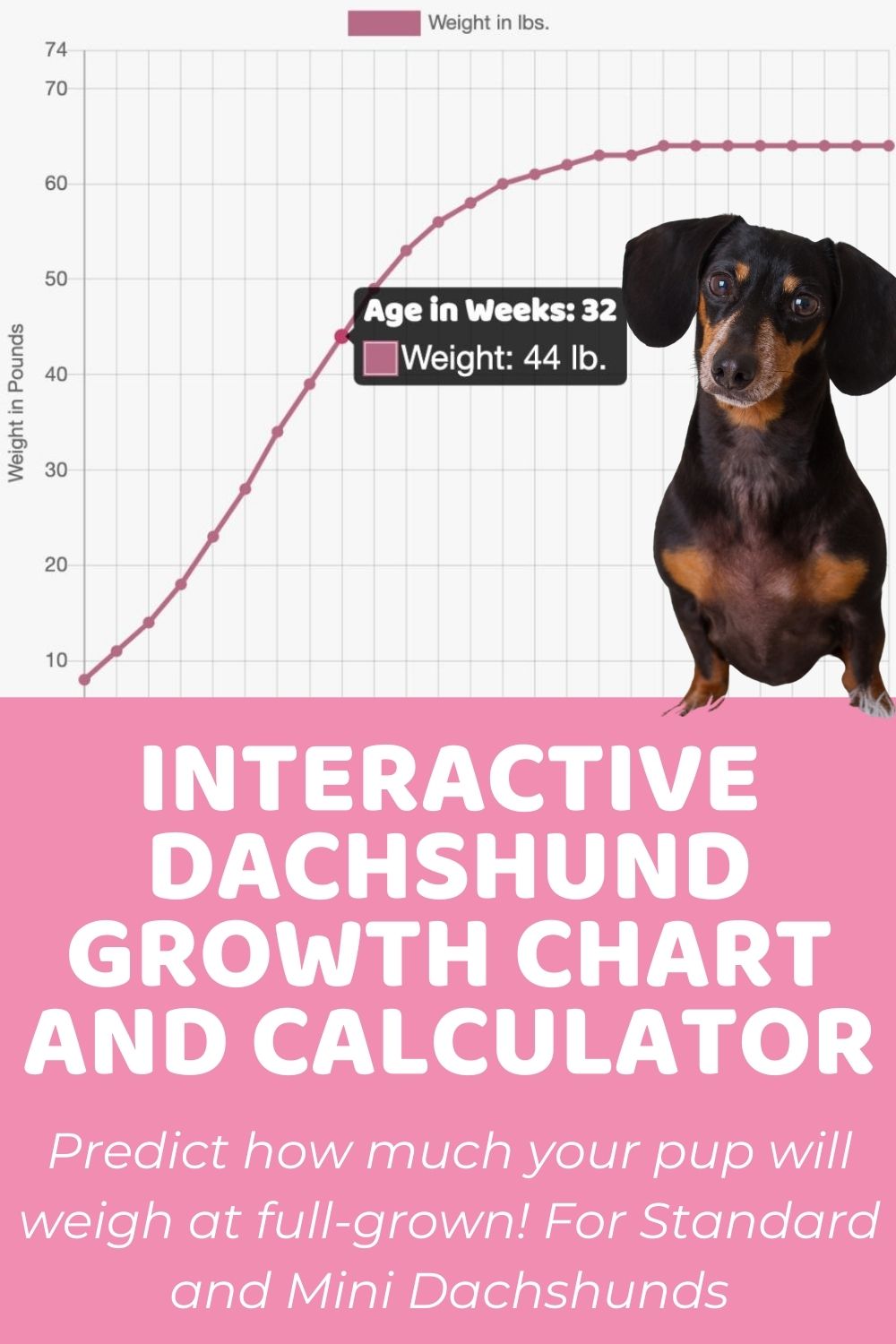